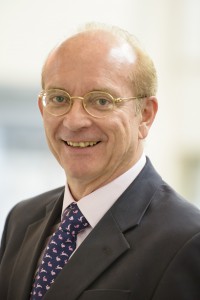 Tributes flowed into FERMA following the unexpected death of FERMA Board member and Secretary General Edwin V Meyer on 7 February.

FERMA offered friends and colleagues the opportunity to express their thoughts via LinkedIn and on the FERMA website. Other condolences came direct.

Julia Graham, President of FERMA, says: “We have been heartbroken at the loss of a dear friend and a good colleague. Condolences messages have included the words: professional, enthusiastic, engaging, humble, cheerful, thoughtful, a good listener and a true gentleman. Edwin’s death has left an enormous gap in our profession. He had only recently taken up the role of FERMA secretary general and was going to build on the important work done by his predecessor Pierre Sonigo.”

It was not just Edwin’s wisdom and leadership as a risk manager and as a FERMA board member that Julia and her colleagues will remember him for. “We all recall his wry smile,” she says. “You would be developing an intellectual argument and thought you had made a great point, when out of the corner of your eye, that smile would appear on Edwin’s face and you just knew you were in trouble! He was such a thoroughly nice, thoughtful and smart person.”

Jo Willaert, Deputy President of FERMA, said: “Edwin and I were colleagues during our time at Sedgwick together. Our paths came together again when we became peers as risk and insurance managers. Our friendship, his smile and good advice, and his positive way and creativity of approaching challenges will be forever in my mind.”

Julia, Jo and board member Carl Leeman travelled to Heemsteed in the Netherlands for Edwin’s funeral. “The church service and the service at the crematorium were very well attended and there were wonderful tributes and opportunities to reflect with Edwin’s family and friends on a lovely man who led an interesting life,” said Julia.

Career
Throughout his career Edwin worked internationally with a focus on risk management and insurance servicing the needs of global clients. As General Manager Risk and Insurance for ArcelorMittal based in Luxembourg, he had global responsibility for setting ArcelorMittal’s insurable risk strategy, standards and procedures as well as worldwide implementation. He was a director of various captive insurance companies in a number of territories and handled ArcelorMittal’s captive.

To read some of the tributes, see:
https://www.ferma.eu/ferma-announces-with-great-sadness-the-death-of-secretary-general-edwin-v-meyer/?fulllist=1