The Federation of European Risk Management Associations announces with great sadness the death of its immediate past President, Jo Willaert. He was President of FERMA from 2015 to November 2019 when he handed over to the current President, Dirk Wegener. 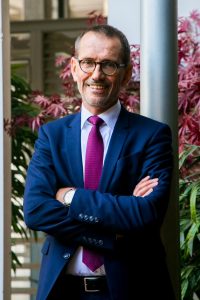 Dirk Wegener said: “We, the FERMA team and the entire European risk manager community, were shocked by the news that our dear friend, colleague and comrade Jo Willaert had passed away. Over the weekend, we received numerous messages from people expressing their dismay, grief and sadness, but also full of thankfulness and appreciation for his dedicated service to FERMA and our community. I, as well as many others, have lost a friend.”

Jo chose education, leadership and communication as the themes of his FERMA presidency, and they have been the driving forces behind what FERMA accomplished during his mandate as President and continues to do. “It is a fine record to reflect on. We are grateful to Jo for his enormous contribution to FERMA and the risk management community.” said Dirk.

We have collaborated with other organisations including Insurance Europe, the brokers’ organisation BIPAR and the internal auditors in ECIIA to improve communication about risk. Education was one of Jo’s passions, and among his accomplishments with the FERMA board was the creation of the first European risk management certification, Rimap, starting in 2015.

FERMA CEO Typhaine Beaupérin said: “We have all benefitted from Jo’s skills, his time and his enthusiasm. He had a wonderful way of bringing people together, and he did so over his four years at FERMA President. He was a strong advocate for risk management and a friend to many. We will miss Jo very  much and will always remember him with gratitude and affection.”

A law graduate, Jo spent the first part of his career in broking with companies which eventually became part of Marsh and later with Aon. He joined the imaging solutions group Agfa-Gevaert in 2001, where as corporate risk manager he was in charge of the design of worldwide enterprise risk management and insurance programmes.

Jo also served as a board member of the Belgian risk management association BELRIM.

He was also President of the International Federation of Risk Management Associations (IFRIMA) for from 2017-2019.

You may leave your own tribute, memories of Jo and condolences to his family through the website of the funerals by clicking here.

You will have to scroll down for Jo’s memorial to appear or simply use the search tool by typing Jo Willaert’s name:

Gilbert Canameras, former Secretary General of FERMA, said: “Jo was not only the president of FERMA, he was my friend, my beloved friend.  I had the chance to work very closely with him during all his presidency. With Typhaine we were an unbelievable team, so strong and confident, each one for the two others so that we would succeed in all our challenges, and they were may and sometimes difficult. But the happiness and friendship were always there as a cement of our team.” Click here for Gilbert Canaméras full tribute to Jo.

You are welcome to leave your message on our LinkedIn post dedicated to Jo: