The Federation of European Risk Management Associations (FERMA) has issued a paper on the role of risk management in support of the priorities of the Czech Presidency of the Council of the European Union to further enhance the resilience of the EU economy and the cyber security of the continent. The Czech Presidency began on 1 July and continues until 31 December.

In its paper, “Contribution to the Czech Presidency agenda – Europe as a task: rethink, rebuild, repower”, FERMA states: “As the representative body for the risk profession at European level, FERMA takes an active interest in the various implications of the resilience and digital agenda and looks forward to engaging with the Czech Presidency during its tenure at the helm of the Council of the EU across the second half of 2022. As risk managers, our role is to coordinate awareness and action across corporate functions so that organisations are more resilient whatever threats they face.” 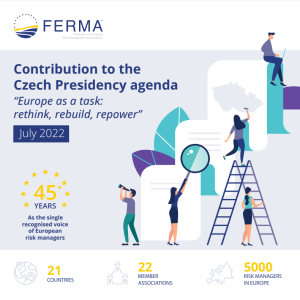 For both thematic areas, FERMA presents the challenges faced by European businesses and explains how risk management “savoir-faire” can contribute to the objectives of the Czech presidency. FERMA also uses the document to highlight some key considerations from European risk managers to the Czech Presidency. For instance, FERMA is optimistic that the Czech presidency can make solid progress on the general approach to the Cyber Resilience Act (CRA) initiative. However, it is also important that there is work on a more holistic approach at EU-level to cyber resilience, as highlited in FERMA’s position paper.

FERMA also draws attention to the growing concern of risk managers regarding the cyber insurance coverage gap. Cyber threats continue to be the main concern for risk managers (according to our 2022 European Risk Manager survey). More generally, FERMA believes that insurance coverage gaps should be higher on the agenda of policymakers. We are convinced there is a link between closing these gaps and enhancing the resilience of the EU economy. On this matter, FERMA looks to the Czech presidency to carry Solvency II over the finishing line. In particular, FERMA hopes there is a more proportionate prudential regime for captives.

Said Dirk Wegener, FERMA President: “building upon the success of our paper for the French Presidency, our paper outlines the views and concerns of risk managers on matters that will be debated during the Czech Presidency. FERMA offers its unique expertise in risk and insurance management to support EU policy makers enhance the resilience of the EU economy and the cyber security of the continent.”